Posted July 28, 2011 by Marcy Twete in Women's Issues
Forty nine years after her death, the incomparable Marilyn Monroe is still making waves and generating headlines with her scandalous bloomer flashing moment from “The Seven Year Itch.” Just two weeks ago, a massive sculpture of Ms. Monroe’s iconic moment was erected on Pioneer Court, directly in front of my building. The statue is getting its fair share of tourists, and its fair share of press. One of our German consultants was even interviewed by Berlin’s paper and asked to provide photos of the famous statue. So apparently the world is buzzing about this new Chicago landmark.

At first, the statue didn’t say much to me. It was Marilyn Monroe. What else can be interpreted from it. But after two weeks of walking out of my office to this view: 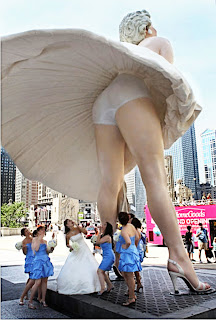 I’m beginning to change my tune. Looking at Marilyn’s beautiful face or buxom figure ain’t so bad, but walking by the cheeks of her buttocks every day is really starting to get to me. Each day, my feminist principles rise higher and higher in my chest as I ask, “Really?”

Members of the Chicago press have been mixed on the sculpture. Some are happy there’s finally a statue of a woman prominent in Chicago. Others feel we could have honored a more suitable icon – although I don’t know that there are any up skirt shots of Eleanor Roosevelt or Madeline Albright floating around anywhere to duplicate.

I’m still forming my opinion on Marilyn in Chicago, but overall, I’m pretty sure week after week of butt cheeks in your face will turn you off eventually.